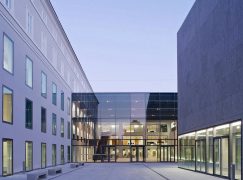 The Salzburg university is fast becoming the laughing stock of cultural Europe as its latest attempt to appoint a rector collapses in disarray.

The story so far: two years ago, the Mozarteum appointed a German pianist, Siegfried Mauser, as its rector.

He turned out to be a molester of female colleagues, convicted by a Munich court.

His successor, from Cologne, took one look at the Mozarteum’s governance and fled this summer before starting work.

In panic they appointed a nice lady from Trossingen, but her salary demands were so off the scale that they got leaked to a Vienna newspaper.

Last night four members of the Mozarteum board of governors resigned, leaving a meeting that was supposed to endorse the new rector several rumps short of a quorum. Collapse of stout council.

The Mozie, meanwhile, is hilariously headless.