For years, the first port of call for New York classical PRs, after the Times, has been the NPR and CBS talkshow host Charlie Rose, a man who genuinely enjoyed classical music and never subjected any artist to probing questions.

Charlie Rose was suspended last night by CBS News and PBS after the Washington Post published accusations of sexual molestation against him by eight women, mostly on his staff.

Rose, 75, issued this statement: ‘In my 45 years in journalism, I have prided myself on being an advocate for the careers of the women with whom I have worked. Nevertheless, in the past few days, claims have been made about my behavior toward some former female colleagues. It is essential that these women know I hear them and that I deeply apologize for my inappropriate behavior. I am greatly embarrassed. I have behaved insensitively at times, and I accept responsibility for that, though I do not believe that all of these allegations are accurate. I always felt that I was pursuing shared feelings, even though I now realize I was mistaken.

‘I have learned a great deal as a result of these events, and I hope others will too. All of us, including me, are coming to a newer and deeper recognition of the pain caused by conduct in the past, and have come to a profound new respect for women and their lives.’ 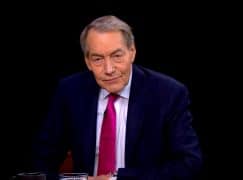 Classical PRs will need to find a new outlet.

Meanwhile, the bragging pussy-grabber sleeps soundly in the White House.