How China is taking over the musical future

From my piece in the Spectator today:

… And this is where the Chinese revolution comes close to home. Shanghai grads have been winning seats in orchestras across the US and Europe. The next wave of Chinese players will be coming from our own colleges, royal and ancient and underused.

Every ranking music conservatory is now marketing in China, peddling its pedigree for dear life… 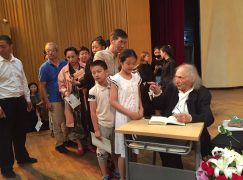