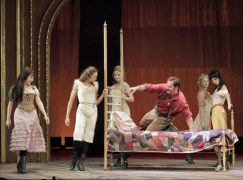 Joshua Kosman is first in print with a review in the San Francisco Chronicle of the world premiere of the John Adams-Peter Sellars opera, Girls of the Golden West.

He’s unimpressed with what he calls as ‘operatic tofuturkey’:

Bloated, repetitive, self-righteous and dull, this commission by the San Francisco Opera (in partnership with the Dallas Opera and Dutch National Opera, Amsterdam) represents a miscalculation of astonishing dimensions….

“Girls of the Golden West” is a work that seems to have taxed Adams’ prodigious creative energy to its breaking point, leaving him to recycle favorite stylistic tics from his earlier work (and from other composers) amid a stream of discursive monologues and choppy ballads.

All of this, needless to say, comes as a huge shock from a team that has given us such operatic masterpieces as “Nixon in China” and (on balance) “Doctor Atomic.”

Next review by Janos Gereben of SFGate (but on his own site) is no less of a let-down:

It is the music that’s the surprising, almost shocking disappointment. Meandering, uninteresting vocal lines are heard against a monotonous orchestral background that takes the listener back to the early days of Minimalism — not even Adams’, but Philip Glass’ at his worst. It’s only at the very end of the opera, during a lengthy death-and-lamentation scene that musical beauty appears, but it’s too late: some of the audience have left, others sit numb, and a small group of fans applauds enthusiastically.

There are gung-ho reviews in the Mercury News  and the SF Examiner. Nothing yet in the New York Times, NPR or other national media.

Mark Swed in the LA Times is more measured.

Some really good news: Milos is back »