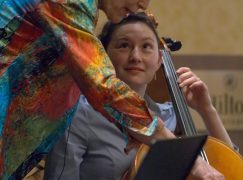 Death of US cello leader, 92

Former president of the American String Teachers Association, and professor of cello at the University of Texas at Austin for half a century, Phyllis Young has died at the age of 92.

Born Phyllis Casselman and raised in Kansas, she studied with Horace Britt at UT Austin and completed her studies at the Paris Conservatoire and the Chigiano Academy in Siena.

She taught at UT from 1953 until 2007, one of the first women there to be promoted to full professor. In addition to private cello tuition, she founded the Texas Cello Choir and directed the UT String Project.

Here are her tips on vibrato technique.

The Berlin Phil played Shanghai Symphony at soccer. After 90 minutes… »