Death of a principal flute

The death is reported in Bournemouth of Patricia Bonelli, an Irish musician who played with I Solisti Veneti and the orchestra of the Arena di Verona and for 18 years as principal flute at the Teatro Verdi di Trieste.

After retiring in England, Patricia was church organist in Westbourne for 20 years and music director of South Wessex Opera.

A rich and varied musical life. 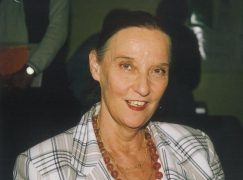