At the Berlin Philharmonie last night the singers Rolando Villazon and Ildar Abdrazakov came on stage just before 8pm to dedicate their performance in memory of Dmitry Hvorostovsky, Ildar’s close friend. 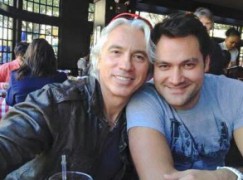 A minute’s silence was observed before the concert began. The Janacek Philharmonic Orchestra Ostrava has joined the two singers on a European tour.

Tonight at the Met, James Levine will dedicate a Verdi Requiem in Dima’s memory.

At the Royal Opera House Covent Garden, the opening night of Rigoletto will be dedicated to his memory.