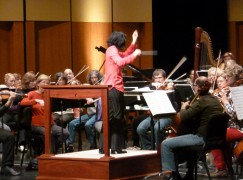 Another US newspaper deletes classical reviews

The Hartford Courant has decided not to review the Hartford Symphony any more.

Editor’s Note: The Courant has shifted the direction of its coverage of the symphony to focus more on advance stories and information to better serve those interested in attending these events who might need more time to make arrangements.

This seems to be a growing trend, and some readers are livid:

It is unconscionable that The Courant will no longer review the major concerts of the Hartford Symphony Orchestra. Whether this decision was made for financial reasons or because a suitable critic could not be found, it is unacceptable to music lovers of central Connecticut….

Ignoring the performances of New England’s second largest orchestra with nearly 4,500 subscribers and 2,000 donors is an affront to its musicians and their patrons. A logical corollary would be to ask if the newspaper would ever think of eliminating the daily Sports Section…

Aled Jones is off the BBC while a complaint is investigated »