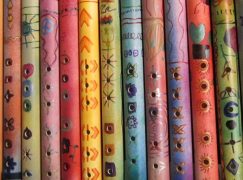 US parents are warned of kids’ flutes ‘contaminated with semen’

An unnamed teacher has been arrested in Orange County, California, after bodily fluids were allegedly found in flutes that were handed out to students in class, from elementary school upwards.

In emails sent to parents of students Friday afternoon, Sept. 29, district officials notified them there was an investigation regarding flutes given to students — as young as elementary-school age — by an individual who is also being investigated.

The flutes were made of PVC plastic piping and a single wine cork and had an exterior that could be decorated, district officials said. The individual… worked at multiple schools districts in Southern California.

‘We were informed that an independent contractor who provided a music enrichment program to the fifth-grade classes at Courreges Elementary School, in June 2017, gave the students flutes/recorders that were potentially contaminated with bodily fluids,’ said Mark Johnson, superintendent of the Fountain Valley School District….

Shock: Dublin concert is cancelled after US conductor is found dead »