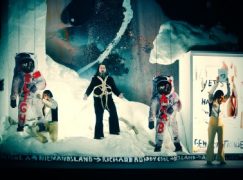 The Parsifal that Bayreuth kicked out

The director Jonathan Meese was sacked last year by Katharina Wagner, officially for going over budget with Bayreuth’s Parsifal. Unofficially, there may have been other reasons.

Meese was asked to stage his concept for the Wiener Festwochen, a production that has now reached the Berliner Festwochen. So did Bayreuth miss a masterpiece? Our anonymous reviewer thinks not.

Meese’s Dramaturg, introducing the long evening, stipulated that we were not about to see the original Bayreuth concept. Four hours and 15 minutes later, we were still confused.

Meese insisted that he was sacked by Bayreuth because he loved Wagner too much. No hint of that here. The subtitles projected Wagner’s recognisable but slightly changed text, with (in red) Meese’s pop cultural commentary underneath. Gurnemanz was dressed as Meese himself, Parsifal was a countertenor, Kundry was Wagner, Klingsor was Doctor No, Meese made frequent Hitchcock appearances and the foyers were full of installation boxes.

A cross between Christoph Schlingensief’s operatic self-indulgence, a school play, and the worst drag show you’ve ever seen, complete with an audience of talkers, sleepers and iPhone photographers. If I had not been familiar with the original Parsifal, I might have been one of the many who left in the two intervals. But the “recomposed” score by Bernhard Lang was a continual source of fascination, and with such illustrious ensembles as the Klangforum Wien and the Arnold Schönberg Chorus, the evening could have at least been halfway worthwhile. An orchestral highlight, spontaneously applauded, was the opening of the second act, Klingsor’s Magic Garden music (saxophone!) .

When the ideas run out, show a film. Long excerpts from Fritz Lang’s “Siegfried” and “Kriemhilds Rache” almost distracted from this Theater der Schlampigkeit, and a longer film sequence of Meese organising his action comics broke the monotony of the stage business and untidy choreography. Meese has his fans, a few of them, and the Berlin event-culture crowd has three more nights to cheer him on.

I have seen the Meese Parsifal and it doesn’t work.

Death of a Soviet Grammy nominee, 80 »