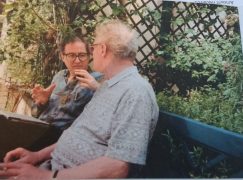 This private photograph has just turned up in a desk I was clearing. 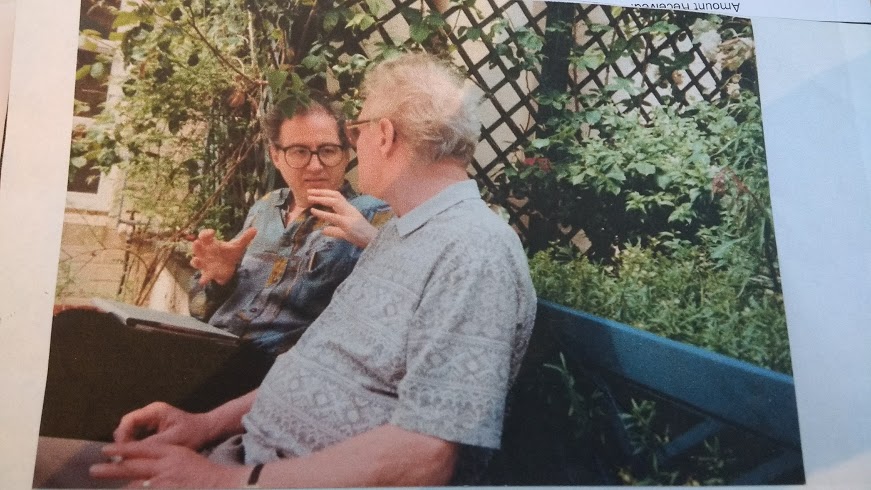 It shows Klaus and me in a fairly typical pose, me pressing him for an answer on something or other, him smoking, listening, worrying whether he’s going to make it to the podium later that day.

As it happens, it was the last time he ever conducted. Not one of the world’s great orchestras, either, but showing a student ensemble at Oxford University how to play beyond the parameters of the possible. Ravaged by cancer treatment, rocked to the roots of his confidence, the most instinctual conductor I ever saw laid down his baton that day. Though we spoke on the phone, we never met again before his death.

Here’s an appreciation that I wrote for the Telegraph when the sad news came through, in January 1998. 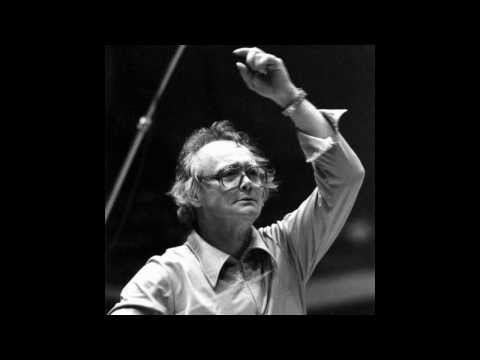 Genius at transient as music itself

KLAUS Tennstedt is dead, and part of us dies with him. He was the last conductor to bring a London audience roaring to its feet – not in acclamation but in sheer catharsis at the resolution of one of Mahler’s meaning-of-life symphonies. And as the rafters trembled in the Festival Hall, this lanky old man in sweat-soaked tails, strands of white hair plastered to his cranium, would peer through steamed-up glasses at the stomping masses, wondering what had caused the upheaval.

For four short seasons in the mid-Eighties he was music director of the London Philharmonic Orchestra. It was the only position he ever fulfilled with any accomplishment, for there was in Tennstedt a glorious impracticality and a streak of self-destruction. John Willan, manager of the orchestra, could never be entirely sure that his conductor would reach the podium without tripping over his shoelaces. Sometimes he turned up with the wrong score. His standing was relatively low in France, where he once showed up with a mutinous orchestra and a strong whiff of booze.

He was a nightmare to the music industry; his wife, Inge, joked that EMI could issue a boxed set of his unfinished recordings. Nor was he any respecter of reputations. When Jessye Norman failed to reach the top notes in a recording of Wagner excerpts, Tennstedt refused to have anything more to do with her. There was a transparent honesty to the man that refused to countenance studio fakery. Not since Klemperer had we heard anything like him.

His life story is unremarkable, a common German odyssey. Born in Merseburg in 1926, the son of an orchestral musician, he listened to “forbidden” discs during the Second World War and was trapped in the Soviet zone at the armistice. A talented violinist, leader of a symphony orchestra at 19 and with hopes of a solo career, he lost his livelihood when a growth appeared between two fingers. After a year’s depression and a broken teenage marriage, he crept into the opera house and looked for work as a répétiteur.

They quickly recognised his conducting ability, but Tennstedt had no intention of joining the Communist Party and could not get a decent job. After stints at Chemnitz, Dresden and Schwerin, Tennstedt tried his hand freelancing in East Berlin. His friend Kurt Masur, a smooth operator with the comrades in power, got him out of several sticky situations. At his first foreign concert, in Sweden, he skipped to the West.

All it gained him was another provincial post, this time in the Baltic port of Kiel. A Canadian manager passing nearby heard him conduct Bruckner and gave him a date. An American agent booked him for Boston, where his début in Bruckner’s Eighth Symphony was one of those occasions that pushed world news off the front page. Tennstedt, at 49, was an overnight sensation, besieged by every orchestra in America.

Yet each time he went before the Philadelphia or the Chicago Symphony Orchestra his self-belief was strained. He rushed home to Inge, a down-to-earth former alto, and suffered some kind of nervous breakdown. In a year of slow recovery he discovered an affinity with the sufferings and symphonies of Mahler.

When he next took up the baton Tennstedt joined the ranks of the greatest Mahler interpreters. “I won’t say anything against young men,” he once told me, “but you have to take some blows in life in order to understand the great composers.”

The performances come rushing back to mind. A Sixth Symphony in which all of the century’s horrors seemed to be contained in the terrifying opening march. An Eighth Symphony that achieved, for the only time in my life, total coherence. A Ninth that trespassed into a world beyond ours, a world of truth. These are the unforgettables, the unrepeatables.

His repertory was small enough to start with and he whittled it down further to the bare essentials: Mahler, Beethoven, Bruckner, Brahms. His Mozart was stodgy as apricot dumplings and his Prokofiev sounded like German vodka. But in the music that mattered to him he could not be touched. I never heard him give a half-hearted performance, nor leave the podium anything but drained.

The players would walk through fire for him. He once conducted the Adagietto of Mahler’s Fifth Symphony so slowly that they could barely aspirate – and then whipped into the finale without a second’s pause. His specs were by now so covered in sweat that he had to wipe them clean, so the orchestra had only the beat of his kneecap to follow.

He was convivial enough, but was often lost for conversation, not being of an intellectual turn of mind or having much of a memory for gossip. On his balcony at Kiel, he would sit for hours watching the ships pass by. Yet there was a magnetic quality to him that was felt by musicians and children. As we chatted in German, my fidgety nine-year-old daughter sat motionless, transfixed at his side, his arm around her shoulders.

His London life ended sadly. A chain-smoker, he was diagnosed with lung cancer in 1985 and underwent surgery and radiation. He would never feel the same again, his fragile self-belief shattered beyond repair. He cancelled concert after concert, only to be greeted by a huge banner, hanging from the upper balcony of the Festival Hall: “Welcome back, Klaus!” The orchestra stripped him of his title in August 1987, but continued to hope he would recover. He finally gave up on the first day of a tour of Japan in 1992, succumbing, it seemed to me (I lunched with him that day), to a frailty of mind rather than of body.

I heard him conduct his last recording, the Beethoven violin concerto in Kiel with Nigel Kennedy, a fellow victim of musical pressures. I last saw him three summers ago in Oxford, where he had been coaxed into directing the student orchestra. For six short minutes of a Weber overture, Tennstedt was back at his best. But the moment he put down the baton, he became an old man, defeated by pain and loss.

If he could not conduct, he did not want to live. He resumed smoking with a vengeance and ruptured old friendships. Until last week, there were still people in orchestras and record companies who believed he would some day return. He belonged to no tradition and left no pupils. Like the ephemeral art of music at its finest, he has been – and gone.

« The highs and lows have switched places

The highs and lows have changed places »