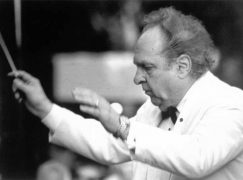 Mourning for a New York maestro, 88

Artists are mourning Vincent La Selva, founder of the New York Grand Opera Company in 1973 and a regular conductor with City Opera and other ensembles.

In the Verdi centennial year, he conducted the complete works in chronological order.

The funeral will be held on Tuesday morning, October 17, 2017, at St. Patrick’s Cathedral, Fifth Avenue between 50th and 51st Streets, New York City.  In lieu of flowers, donations can be made to the New York Grand Opera.

The evening before, in Montclair, New Jersey, a visitation begins at 4 pm at the Moriarty Funeral Home

Vincent La Selva died on October 9, 2017 at the age of 88 in Cleveland.  The cause was complications from dementia.

Maestro La Selva was the founder of New York Grand Opera in 1973, which for 39 years offered fully-staged opera productions free to the public, most of the productions in Central Park. Since the opening performance May 23, 1973 of La bohème, Maestro La Selva led 55 operas in upwards of 350 performances. Over the years, these performances were attended by more than three million people. In 2001 Mr. La Selva finished an unprecedented eight-year cycle of the complete Verdi operas—all twenty-eight of them—performed in chronological order with a special performance of Verdi’s Requiem at Carnegie Hall. He continued to perform Verdi and Puccini operas in Central Park until 2012 and symphonic concerts at Carnegie Hall and at the Church of St. Paul and St. Andrew in New York City.

« Last of the great Mahlerians has died

Pianist films as his Santa Rosa house burns down »