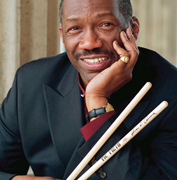 The drummer Alvin Queen, born in Mount Vernon, New York, has been notified that U.S. Homeland Security will not allow him to enter the US to perform at a long-planned Washington concert.

The concert, titled Jazz mmet France, is hosted by Wynton Marsalis and Dr. David Skorton , Secretary of the Smithsonian Institution.

Mr Queen, 67, who holds a Swiss passport, was informed that, due to a run-in with the law as a youth half a century ago he would require a special Waiver from the U.S. Dept of Homeland Security.

He says: ‘Sadly, this doesn’t surprise me one bit. I’ve spent months preparing for this concert. Dozens of others are also implicated in its planning. Funny thing, I gave up my US passport to make life simpler at tax time. I never dreamed I would one day be denied entry, and with such ridiculous reasoning. I am frankly disgusted to be disrespected in this way after a half century devoted to music.’

The only person who could grant an instant Waiver is President Trump and … let’s not go there.

Joshua Bell gets a bloody nose at fraudster concert »