Netrebko is the pivot of new Bolshoi-Met deal

Moscow – New York, (October 9, 2017) In their first co-production collaboration ever, the Bolshoi and the Met announced plans today to jointly create new productions of Aida, Salome, and Lohengrin, with performances to take place in New York and Moscow between 2019 and 2022. The two companies will pool their creative and technical resources to develop and build the new productions, with the Bolshoi performing the productions at their theater in Moscow and the Met performing them in New York.

Although complete casting and creative teams are not ready to be announced, Aida will be staged by Tony Award winning American director Michael Mayer, Salome will be staged by the highly regarded German director Claus Guth, and Lohengrin will be staged by the English director, Phelim McDermott, whose acclaimed production of Philip Glass’ Satyagraha played at the Met in 2011. Russia’s leading soprano, Anna Netrebko, will perform in all three operas, both at the Bolshoi and at the Met, singing the title roles in Aidaand Salome, and the role of Elsa in Lohengrin.

Yannick Nezet Seguin, who will become the Met’s Music Director with the beginning of the 2020/21 season, will conduct the initial Met performances of each production in New York, and Tugan Sokhiev, chief conductor of the Bolshoi, will conduct Salome and Aida in Moscow.

Although the Met and the Bolshoi have never worked before as co-producers, there is a long history of Bolshoi performances at the Met, dating back to 1959 when the Bolshoi Ballet performed at the Met for the first time. The Met has not performed in Russia.

Vladimir Urin, General Director of Bolshoi Theatre said: “I am incredibly pleased that our new relationship, which has been in discussion for a year now, will happen and will result in several opera masterpieces appearing in New York and in Moscow. To collaborate with this great theatre has been a longtime dream.”

Peter Gelb, General Manager of the Metropolitan Opera said: “We’re very pleased to be partnering with
such a renowned company as the Bolshoi and to be pooling our resources with them.”

Negotiations for the new co-production arrangement began in the summer of 2016 when Urin and Gelb met for the first time at a meeting arranged by John Berry CBE, an advisor to the Bolshoi and former chief of the English National Opera. Irina Chernomourova, the head of the long-term planning department of the Bolshoi, will be responsible for implementing the project for the Russian company. 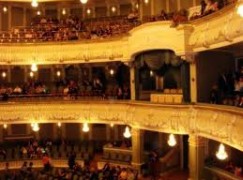