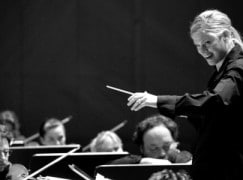 Mrs Gelb gets hammered in the Times

The show’s musical qualities are fatally impaired, however, by the conductor Keri-Lynn Wilson’s continual struggle to keep pit and stage together.

George Hall (FT):  Conductor Keri-Lynn Wilson engages their focused attention, though here and there a bit more drive would be welcome.

Rupert Christiansen (Telegraph): There are some solid musical consolations, starting with Keri-Lynn Wilson’s elegantly incisive conducting and the vivacious playing it draws from the orchestra.

Keri-Lynn Wilson is married to Peter Gelb, general manager of the Metropolitan Opera.

It is unclear why she has been given a plum production at a national opera house in London. Her only other operas this year were Don Giovanni in Bilbao and Tosca in Toronto.

Reember Sir Thomas Beecham’s quip? ‘Why do we in England engage at our concerts so many third-rate continental conductors when we have so many second-rate ones of our own?’

« Why Sydney changed its LGBT tune? Read this