Leading Canadian conductor is accused of abusing his niece

One of the icons of French-Canadian music has been toppled this weekend by claims by his niece and other family members that he abused them sexually when they were very young.

The niece, Sophie Bernier, discloses in an interview with Le Soleil that Françoys Bernier, chief conductor of the Quebec Symphony Orchestra and founder of the Domaine Forget academy, invaded her bed and abused her from the time she was fourteen years old. A cousin corroborates her account of his conduct. Her mother, too, admitted that her brother groped her as a young girl.

Here’s the story in Le Soleil. And a followup in Ludwig Van Montreal.

Shocking even among the present torrent of sexual harassment. 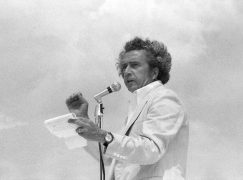