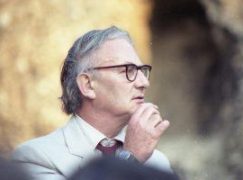 Last of the great Mahlerians has died

I’m sorry to hear of the death of Donald Mitchell, the critic and publisher whose lifelong passions were Britten and Mahler. Together with Hans Keller, he promoted both causes in the late 1940s, founding Faber Music to publish Britten after his friend fell out with Boosey & Hawkes and writing several lengthy studies of Mahler that contained profound and original insights into the composer. Donald was 92 and had been suffering from dementia for more than a decade. His wife, Kathleen, died earlier this year.

After the great English storm of 1987, Donald called me to say he was still without electricity and was depressed that the storm had blown down a tree that Britten and Pears had planted in his garden. He found comfort, he said, by reading the pages in my book Mahler Remembered where the composer, alone on a rainswept mountain, was starting to compose his ninth symphony. Suddenly, said Donald, ‘life was meaningful again.’

We were walking in Stockholm with Henry-Louis de La Grange, the French Mahlerian, who expressed an innocent interest in the works of Michael Tippett in relation to Benjamin Britten. ‘Not to be mentioned in the same breath,’ said Donald, whose loyalties never wavered.

Mourning for a New York maestro, 88 »