Joshua Bell gets a bloody nose at fraudster concert

During an event billed as ‘The Concert of a Lifetime’, the violinist Joshua Bell suffered a persistent nosebleed and was reaching for tissues throughout his performance.

The concert was a tribute to the late Herbert Axelrod, a controversial businessman and violin collector who mingled occasional philanthropy with outright fraud and went to jail for dodging US taxes.

Among Axelrod’s dubious enterprises was a sale of overvalued Italian violins to the New Jersey Symphony, almost driving the orchestra out of business.

Bell, however, was a recipient of one of his better Guarneris.

The concert took place before an audience of 400 at the Axelrod Performing Arts Center in Deal, New Jersey.

Nosebleeds can be brought on by emotion. 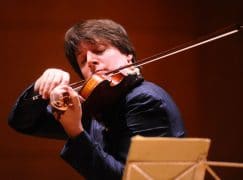