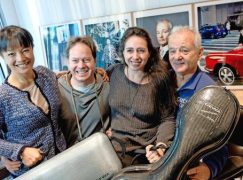 Nobody knew what to expect. Probably a quirky, Midwest-voweled reading of Ogden Nash or TS Eliot, you know, conventional texts that are suitable for a concert hall. Instead, a sold-out Chicago Symphony Center Tuesday night witnessed everything they knew about classical music upended by a two-hour hug from actor Bill Murray.

The comedic icon brought his elegant-playing friends on stage for a meditation on American poetry and European music that married common and uncommon threads while breaking all rules, including saying the N-word out loud. Great musicians know how to make a concert hall smaller and smaller. By the end of the evening, 2,500 of us felt  Murray whispering the secret to life directly in our ear, as he famously did to Scarlet Johansson at the end of Lost in Translation.

Nothing was lost here, though, as Murray took us through a love letter to Hemingway, the existential pain of depressed French painters, nature seekers Walt Whitman and James Fenimore Cooper, our nation’s hapless political history, the gospel according to Van Morrison, his beloved comeback kids of baseball, the  Chicago Cubs, and a heartrending, perfectly-voiced reading  of Huck Finn’s self-revelatory paean to releasing slaves.

Each time we thought we saw the most poignant moment of the evening, Murray and colleagues Jan Vogler, Mira Wang, and Vanessa Perez added another layer of intimacy and depth to the performance, astoundingly elevating and giving new life to some of the most cliched musical works. Perez shone new pearls in her pianissimo phrases of “I Dream Of Jeannie with the Light Brown Hair,” and she and cellist Vogler somehow made “Moon River,” formerly concerto for elevator and disgruntled riders, into something newly profound.

Murray shot us right through the heart when he took violinist Wang’s hand and danced a soulful tango with her onstage to the accompaniment of tango master Astor Piazolla. In the middle of Wang’s virtuoso reading of Heifetz’s showy version of “It Ain’t Necessarily So,” Murray shocked us all by singing the Gershwin lyrics better than anyone since Satchmo. Murray’s singing was the best gift of the evening, in a rousing version of “When Will I Ever Learn To Live In God” that made soulful melancholy an art form.

But that was only a warm up: The cornerstone was a homage to centenarian Leonard Bernstein. Murray crooned a gut wrenching yet dignified “Somewhere” and immediately turned tears into giddy laughter with his barnstorming and unimaginable rendition of “I Feel Pretty.” He then teased and defied the most famous rhythmic motive in all of musical theatre by singing “I Like To Be in America” in his own invented way, underlining five words of Sondheim’s as an anthem for the woes of 2017, ending the concert by punctuating “Puerto Rico’s in America” to an avalanche of applause.

We thought we would get our Ogden Nash when Vogler and Perez started playing “The Swan” during the drawn out encore session. But Murray surprised us  again, narrating Lucille Clifton’s stunning “Blessing the Boats,”  sending us off with a graceful benediction.

If you are anywhere near New York, do whatever it takes to see and hear these four musicians make miracles anew at Carnegie Hall on October 16.