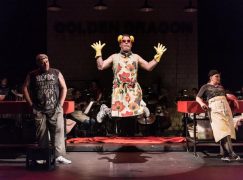 Peter Eotvos’s opera The Golden Dragon had been performed without much fuss outside London, until Hackney Empire bowed to unnamed pressure groups and refused to grant it stage time.

The Guardian acclaims this act of censorship as a victory for diversity.

Many of its readers appear to think otherwise.

Among almost 200 comments, you will find:

– Opera has never been a realist medium.

– If there were queues of Chinese opera performers who had been refused parts, then you know there might be a point. But somehow I doubt it. What the bloody hell are people supposed to do to get the seal of Guardian approval. The Welsh Music Theatre creates an opera production to illustrate the immigrant experience in a supportive way & it’s still fucking wrong.

– Speaking of diversity and relfecting how the UK looks today here’s a link to the Guardian’s editorial board. https://en.wikipedia.org/wiki/Guardian_Media_Group#Corporate_governance

– Guardian keeps banging on about diversity meanwhile elections throughout the west are increasingly being won by candidates who represent the opposite. People are clearly bored by having diversity shoved down their throats at every instance. This is why Brexit happened.

The Parsifal that Bayreuth kicked out »