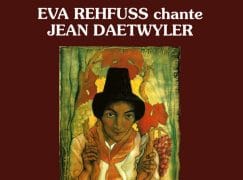 The Offenbach expert Jean-Christophe Keck and a lawyer, Michèle Gruffaz, are facing court in Lyon accused of exercising undue influence on Eva Rehfuss, a Swiss opera singer who died in December 2008, aged 85.

Ms Rehfuss made Keck her sole heir a year before she died, claiming he was her ‘last true love’.

The estate was worth around five million Euros.

Her son has challenged the will.