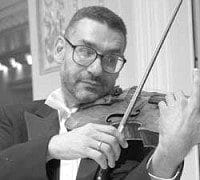 Charles Pikler, principal viola of the Chicago Symphony Orchestra (CSO), is playing his last concerts this week, after 39 years in the orchestra.

Pikler was originally appointed to the violin section by Sir Georg Solti in 1978, winning the viola audition eight years later on the retirement of Milton Preves.

A student of Bronislaw Gimpel, he has also played in the Minnesota Orchestra, Cleveland Orchestra, Rotterdam Philharmonic  and the Boston Symphony.

« Who was Schubert’s father?