Bayreuth’s next director is a MacArthur genius

The first American to direct an opera at Bayreuth has been named among this year’s recipients of a $625,000 MacArthur ‘genius award.

Yuval Sharon, 37, was called in to replace Alvis Hermanis at next summer’s Lohengrin, conducted by Christian Thielemann.

His closest conductor collaborations so far have been with Franz Welser-Möst in Cleveland and Gustavo Dudamel in LA.

The other MacArthur winners this year are listed here. 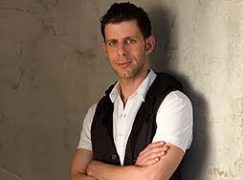