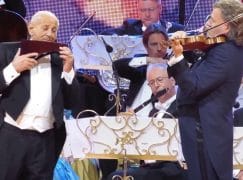 The Dutch violinist and waltz king has begun action to fight a court ruling that fined him 116,000 Euros for bringing children on stage after the legal limit of 11pm.

Rieu was originally issued with a fine of 236,000 Euros for bringing a group of Romanian pan flute players on stage until midnight during the course of seven concerts in the Netherlands in 2015.

Dutch law states that minors may not perform after 11:00 pm.

Rieu argued that the young players, aged 9 to 19, performed much earlier. He was merely bringing them back on stage with the virtuoso Gheorghe Zamfir to wave farewell to the audience.

Judgement will be issued in Limburg on December 4.