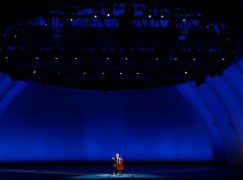 Yo Yo Ma does the impossible?

From Mark Swed’s LA Times review, titled ‘Yo Yo Ma does the impossible at the Hollywood Bowl’:

The Hollywood Bowl shell was lighted midnight blue. The amphitheater was probably kept as dark as the fire marshal would allow. Few of the more than 17,000 seats were empty.

Then for two hours and 40 minutes Tuesday night, Yo-Yo Ma played all six of Bach’s solo cello suites straight though, with just a 10-minute pause in the middle.

The master cellist had never played these suites for a crowd so large, he later confirmed …We need Guinness World Records to determine whether, as I suspect, that this was a record, a larger crowd than any before to hear a performance of all six suites. But whether it was or not, the concert proved an unquestionably great, memorable Bowl occasion….

Not sure which bit the headline writer found impossible: the length of the recital with just a ten-minute break, or the size of the crowd for solo Bach.

When your body says, stop! »