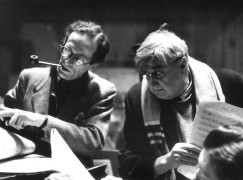 Vaughan Williams’s library is under threat

We have been informed by local campaigners that the highly valued Performing Arts Library in Surrey is under threat of closure.

In brief: Surrey County Council, faced with a £100m deficit, will close Surrey’s PAL early next year unless the library can make cuts of £180,000 or find another organisation that is prepared to take it over.

Mark Welling, Chairman of  the campaign group FOSPAL, says: The Surrey Performing Arts Library is unique. It is not the same as other borrowing libraries. It has one of the best collections in the country of orchestral, choir and drama sets as well as CDs, DVDs, scores and books related to all the performing arts.  It is at the centre of an eco-system of choirs, orchestras, bands, drama groups, opera groups, music teachers, professional musicians and singers as well as individual users.  Thousands of Surrey residents participate in groups which rely on PAL, and many more thousands benefit indirectly as members of audiences of such groups.

The Library houses a unique collection of material and artefacts relating to composer Ralph Vaughan Williams who lived in Dorking and established the local Leith Hill music festival.

No winner at ARD violin finals »