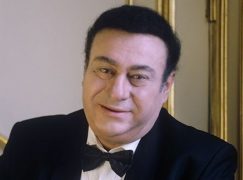 The football star who sang at La Scala

We have been informed of the death, from pancreatic cancer, of the Georgian tenor Zurab Sotkilava, a man of great renown in two very different arenas.

As a teenager, he played for the powerful Dynamo Tbilisi team and was at the start of an international career when an injury sustained in a match in Yugoslavia ruled out any further exertions.

He went to study singing instead, first at the Tbilisi Conservatoire, then at La Scala. In 1973, he made his Moscow debut at the Bolshoi as Don Jose in Carmen, and signed on as a member of the company. He was a regular guest at the Teatro Communale in Bologna, where he was regarded as a Verdi specialist.

Zurab taught many young singers at the Mocow Conservatoire. He celebrated his 80th birthday early this year.

Watch: Anna Netrebko puts on a birthday song and dance »