The website says: This concert has been cancelled. We are actively working to reschedule this date. Ticket holders should hold on to their tickets, and our patron services team will reach out next week with additional information.

They add: We appreciate your patience as we continue to monitor events in St. Louis this weekend.

There were protests in the city Friday night after a white police officer was acquitted of killing a citizen.

U2 have also cancelled their Saturday concert in the tense city. 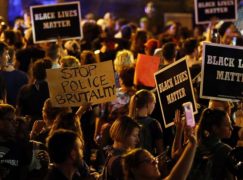