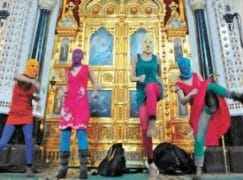 The Russian protest group, imprisoned by the Putin regime and later kicked out of the country, have received the ultimate cultural accolade of respectability – a cover version on a classical album.

‘With our cover of Pussy Riot’s Punk Prayer, we celebrate the band’s courage and the spirit of protest in an age of Orwellian intimidation. In the opening and closing chorales, I use a glass slide on the strings as I pluck with the right for an eerie theremin-like effect. The grunge punk distortion in the bass is also acoustically achieved with a styrofoam cup smashed behind the cello’s bridge.

The traditional three-horse-drawn troika moved across the Russian landscape with its own elaborate system of bells and whistles, used to herald its arrival to the coming town. Here, the composers and songwriters of TROIKA, each in their own way, use the power of their voices to warn and to cajole, to resist and to remember.’