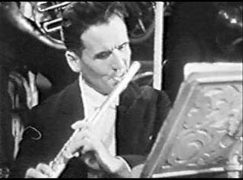 Marcel Moyse: Television is the enemy of music

In 1969 the French flute legend Marcel Moyse visited Copenhagen to give a master class at the Royal Danish Academy of Music, invited by my former professor, Poul Birkelund, who had some of the classes recorded on open reel video tapes.

Many years later I was a student with Birkelund, and he told me about the tapes, tucked away in the basement of the academy. I borrowed the tapes and had VHS copies made – and the result is, I believe, the only still existing video documentation of Moyse teaching.

The final 25 minutes of the material is Toke Lund Christiansen, for many years co-principal flute of the Danish National Radio Symphony Orchestra, playing the Taffanel candenza to the first movement of the Mozart G Major concerto for Moyse.

A choir in every care home… it seems to be working »