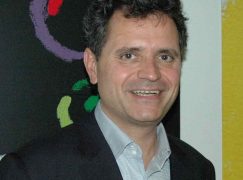 The Lucerne Festival sold 91 percent of its tickets this summer, slightly above last year.

Its exectutive and artistic director, Michael Haefliger, who has been in charge since 1999, signed a new contract this morning, taking him to 2025.

Under Haefliger, the festival’s budget has boomed from 14 to 24 million francs, 95 percent of which is self-financed.

What maestro’s dog does while he’s at work »