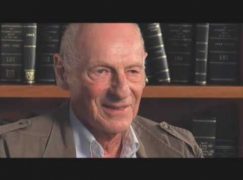 The family has confirmed to us the death of Burton Bernstein on August 26th, a day after what would have been his brother’s 99th birthday.

Burton, a staff writer on the New Yorker from 1957 to 1992, was the author of eight books, among them a biography of James Thurber, a study of the Sinai desert, a celebration of flying and memoirs of his brother and his family.

He was a civilised man, replete with the Bernstein charm.

The first US orchestra to help out after Houston floods »