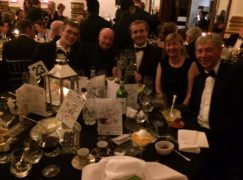 The music director of the Royal Liverpool Philharmonic, Vasily Petrenko, was named Artist of the Year at the Gramophone Awards last night.

He almost didn’t make it to the gala dinner after his flight from Moscow was cancelled at the last minute.

But some really nifty footwork from the Liverpool midfield and a rerouting via a couple of cities that have never played in the Champions League somehow got the maestro there in the nick of extra time.

Just as desserts were being served.

« Vienna Opera boss: I never paid for a singer’s taxi