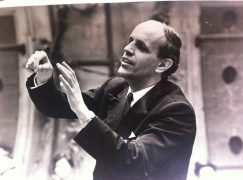 Death of a Viennese conductor, 84

Xaver Meyer conducted more than 2,000 concerts in his long life, many of them on radio and TV.

Born in Vienna on August 28, 1933, he founded the Wiener Madrigalchor in 1955 and led it for the rest of the century.

In 1956 he was appointed chorus master of the Vienna Boys Choir, from 1964 to 1984 he was chorus director at the Theater an der Wien and from 1976 to 1987 he headed the Wiener Männergesang-Verein.

His book “Chorleitung” (Choral Conducting) has appeared in several editions.

« A third musician is found dead in Canterbury house