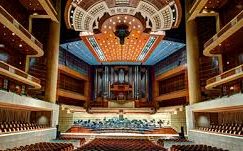 The Dallas Symphony has reached a new three-year contract with its musicians, based on a wage freeze for the first year. The next two years will see a two percent upgrade.

The reason for the pay freeze in the first year is that management agreed to substantially increase its contribution towards the musicians’ health care costs. That was referred to a little obliquely in the press release, but it was something that was really important to us.  There were also numerous improvements to working conditions.