A sex charge simmers in a New York school of music

A firm of New York lawyers are pleading the case of a former graduate of Eastman School of Music at the University of Rochester, New York, who alleges that he was sexually harassed by the head of the piano department, Douglas Humpherys, and suffered professional prejudice for refusing his advances.

The case has now gone before the US Court of Appeals.

There has been no reporting of the case in music or academic media; the only account appears in an insurance journal. Since the case is still before the courts, commenters are advised to exercise discretion. 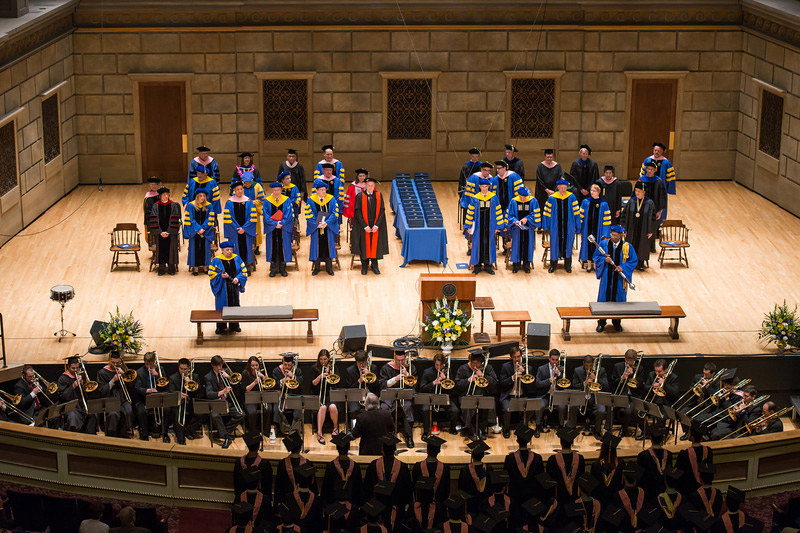 Here is the judges’ summary of the case at the last hearing, in June 2017:

Irrera was a graduate piano student at the Eastman School of Music (“Eastman”) of the University of Rochester from 2009 to 2014, pursuing a doctor of musical arts (“DMA”) degree. Humpherys, the chair of the piano department, was initially Irrera’s teacher.

The complaint, accepted as true for purposes of this appeal, made several allegations against Humpherys. He made an unwanted sexual advance toward Irrera by caressing Irrera’s shoulder and rubbing his hands up and down Irrera’s arms for approximately four minutes during a piano lesson. Humpherys also leaned his crotch into Irrera’s back during the same lesson. On other occasions Humpherys winked at him, blew kisses at him, raised his eyebrows at him, and looked up and down at him in a sexual manner when they encountered each other in Eastman’s common areas. Another professor at Eastman, who was a close confidant of Humpherys’, told Irrera that Humpherys was “in love” with him. Irrera rejected Humpherys’ sexual advances.

Students seeking a DMA degree are required, among other things, to perform two solo recitals on their primary instrument. Humpherys repeatedly assured Irrera that he was ready for his first required solo piano recital and that he would do well in that recital, a prediction that almost always proved correct with other students. The recital was judged by a panel of three professors, including Humpherys.

Graded on a pass/fail basis, Irrera was given a failing grade in retaliation for rejecting Humpherys’ sexual advances. Another professor at Eastman informed Irrera that Humpherys, walking into the recital, had told her that “it will not go well[,]”, and, after the recital, told Irrera that he had played well enough to pass.

Humpherys gave Irrera unusually short notice of his second solo recital, which was judged by the same panel that judged the first recital. The second panel also gave Irrera a failing grade.

In the 27 years that Irrera had been playing the piano, he had never previously failed a solo recital.A few months
after being judged to have failed the second solo recital Irrera won the American Protégé International Competition and performed at Carnegie Hall for the second time. After Eastman assigned another member of the piano faculty as Irrera’s teacher, he was successful on all his subsequent recitals and graduated with a DMA degree in 2014.

Humpherys told Irrera in a recorded conversation that he “would never get a university professor job,” and threatened to “make his life a living hell” if he made any written report of sexual harassment. An Eastman Dean,
Marie Rolf, told Irrera that she expected that “future employers would call, email or otherwise contact Humpherys
to get feedback regarding [his] abilities to perform in his primary instrument[,]”, that “she received calls all
the time even though not listed as someone’s reference,” id., and that “‘we cannot get [Humpherys] out of your life
— he has been your teacher for so long[,]’”.

After receiving his DMA degree from Eastman, Irrera applied to twenty-eight colleges and universities for open
teaching positions in their piano departments, but did not receive a single invitation for an interview. Such an
outcome, he alleges, is “extraordinarily rare (unheard of)” for an Eastman graduate, and “[p]ractically all of the DMA students at Eastman in the same year have found a job shortly after they graduated and some even while they were still completing the DMA degree.”

Irrera grounded his claim of retaliation on the theory that the absence of any interviews resulted from negative
references from Humpherys and that Humpherys gave a negative reference as a result of Irrera’s rejection of
Humpherys’ sexual advances. The District Court dismissed Irrera’s retaliation claim, concluding that it was
speculative because he failed to make factual allegations that Humpherys or any other professor at Eastman gave any
of his potential employers a reference, let alone a negative reference.

Conclusion: The Order of the District Court is vacated in part, and the case is remanded for further consideration of Irrera’s retaliation claims.

The three-judge panel was unanimous in reinstating the retaliation claim. The judges’ argument is telling in the assumption that anyone receiving a doctorate from Eastman is assured of getting an academic job. The ruling states:

Irrera is a graduate of one of the nation’s most highly regarded schools of music and the recipient of a prestigious honor. Although it is not impossible that all 28 schools to which he applied for open teaching positions deemed his credentials insufficient to warrant an interview, it is plausible that these schools received negative references from the chairman of Eastman’s piano department, who had been Irrera’s teacher.

It is also plausible that a teacher who warned his student that he would make his life a ‘living hell’ if he made a written report of the teacher’s sexual advances would give that student a negative reference, even if the student later complained to a school dean only orally.

And it is also plausible, that since such a teacher is the chair of a department, he would be contacted by schools to which Irrera applied even though he was understandably not listed as a reference,” said the ruling.

Although Irrera’s complaint makes no allegation that he is aware of a negative reference sent to any particular school, common experience indicates that schools and colleges rarely, if ever, disclose the content of the references they receive, in the absence of court-ordered discovery,” said the ruling, in remanding the case for further proceedings.

In addition to his duties as chair of the piano department at Eastman, Douglas Humpherys is Artistic Director of the Gina Bachauer International Piano Foundation.