A Kiwi beats off three Yanks at Wigmore Hall 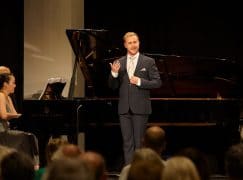