The shocking silence of El Sistema

The Venezuelan government has turned against the country’s most successful musician, refusing to allow its youth orchestra to tour the United States with Gustavo Dudamel.

President Maduro has claimed that Dudamel owes everything to El Sistema, which his government owns, and will be punished for his dissent.

There has been no response to the Dudamel sanctions from the Sistema founder, Jose Antonio Abreu.

Or from Sistema graduates with international careers in Europe and the US.

Or, shamefully, from Sistema’s adulators and partners in other countries.

Not a word from Julian Lloyd Webber, for instance, the organisation’s chief promoter in the UK.

Or from Sistema’s apologists in the US, Tricia Tunstall and Eric Booth.

This is not a time for silence.

Musicians who believe in justice and human rights need to make their voices heard. 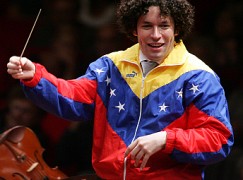