The ballerina whose tutu caught fire

The death has been announced of Janine Charrat, star of the Paris Ballet from 1945 to 1961 when her career was ended by a horrible accident.

Dancing in a television recording of the ballet Les Algues, her tutu was set on fire by stage lights and she suffered 70 percent burns.

She was later appointed artistic director of the Geneva Ballet and a consultant to the Pompidou Centre. 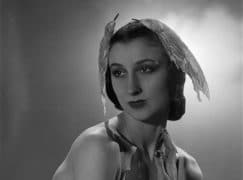