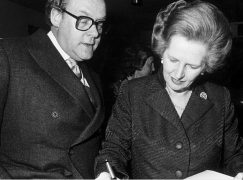 Sad news: The man who built the Barbican has died

The arts will be saddened to learn of the death of Henry Wrong, director of the Barbican Centre from 1970 when it was not even a hole in the ground, to 1990 when it was a fully functioning arts centre. Henry was 87.

Described by Brian Redhead on Radio 4’s Today programme as ‘the Tower of London with carpets’, the Barbican was an aesthetic nightmare that no-one loved, but Henry did his damnedest to change that with a fount of good humour, good management and general bonhomie.

He hated the architects who designed the Barbican, along with some meddlesome members of the Corporation of the City of London, but he bore malice to few others and was exceedingly well liked by artists.

A Canadian, he started out as assistant to Rudolf Bing at the Metropolitan Opera before becoming head of programming at the National Arts Centre in Ottawa. The best thing about Henry was his supreme self-possession. He told the truth as wittily as he could and condescended to no-one (see below).