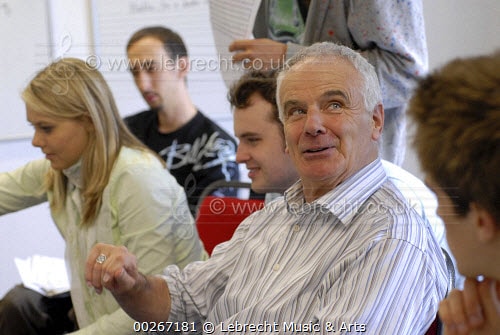 My life with Max: A memoir by his manager

Judy Arnold, who looked after Peter Maxwell Davies for 31 years, has written a memoir of their time together and posted it at the Orkney Library and Archive.

The memoir is extremely detailed and highly revealing of Max’s working methods and his personal relationships.

It breaks off before the legal action that Max took against Judy’s husband, Michael, because this, she says ‘occurred after I ceased to work for him.’

Here’s how it begins:

I first met Peter Maxwell Davies (hereinafter referred to as Max) at the Dartington Summer School of Music in Devon in August 1970. I was there at the invitation of John Amis, and my job as a volunteer was to look after the artists who taught and performed there. I had been the personal assistant of the Polish pianist and composer
André Tchaikowsky for several years during the nineteen-sixties, and in this capacity I had been to Dartington, where André was a great favourite, both as a pianist and a teacher.

One of the concerts that summer at Dartington was given by an ensemble called The Pierrot Players. The main item on the programme was Vesalii Icones, a theatrical work with a dancer, and the group. I was very struck by the work, which was composed by Peter Maxwell Davies.

However, it was another member of the group, the composer Harrison Birtwistle, who took me aside, and asked me if I would consider being his personal assistant, in the same way as I had done for André. I accepted his offer, although I did not know anything about what a composer did. Harry, for so Harrison Birtwistle was always
called, took me to meet the other members of his group, and these included Max. It was thus that I first came into direct contact with Max. My association with Harry only lasted for one month. However, I was now intrigued
by Max’s music and I started to attend the concerts by the group, which had now changed its name to The Fires of London. These concerts were held at the Queen Elizabeth Hall. I was also present at the world premiere of Max’s opera Taverner at Covent Garden in July 1972. I became friendly with two members of the ensemble – Stephen Pruslin, the American pianist, and Mary Thomas, the soprano.

In the summer of 1975, Steve Pruslin phoned me and asked if I would consider being in charge of the newly-formed Friends of The Fires. This had been set up to try to get as many people as possible interested in the work of The Fires. As I was by now an ardent fan, I accepted. One of my first concerts in this new capacity was at the Victoria and Albert Museum in July 1975. This was a series of concerts, initiated by the director Roy Strong, and they were held at night after the general public had disappeared. The main work on this programme was Max’s Ave Maris Stella which
had recently been first performed at the Bath Festival two months earlier. I was completely overcome by this major chamber music work. I astonished myself to find, while compiling my eight Desert Island Discs that Ave Maris Stella had entered into the list, along with Bach’s B Minor Mass and Beethoven’s Op. 110 piano sonata.

Then there was another call from Steve. This time it was the offer of another short-term job with The Fires. He asked if I would be the road manager for a two week tour of the U.K. in November. I told Steve that I didn’t have the slightest idea what anything like that would entail. Steve assured me that it was very easy. The group would be going to twelve different towns, and all I had to do was to see thateverything was in order when I got there. Well, that didn’t sound too onerous, and it might be fun, and I would be hearing a lot of concerts by The Fires. So I accepted. I
requested that I should have all the paper-work connected with the tour.

Then, on 1 October, the phone rang, and this time it was Max, in his very quiet telephone voice. He asked me if I would go over to see him as he had something to discuss with me. I told my husband Michael that I thought I knew what this something would be. In the years since I had worked for André and for that short while with Harry Birtwistle, several artists had asked me to work for them, but I very disinclined to do so.

I went straight over to see Max at the flat he had just bought as his London base which was almost bang opposite King’s Cross Station. Both Max and Steve were there. There was not a stick of furniture anywhere. We sat on the floor. The proposition was put to me that I would become the manager of The Fires of London, and also Max’s manager. I told them that I had absolutely no experience of any sort in this field of activity. My experience with André for all those years was not as a manager, but as a personal assistant, to keep the diary and things in order. I had never gone out to find work for André, as that was done by his various agents around the world. I was assured that there would be no problem with any of that, because the work just arrived of its own accord, and there was plenty of it. I asked how The Fires were financed, and the reply was ‘out of the kitty’.

All of this seemed, on the fact of it, to be satisfactory. I said that I would need a while to think about this, as it would be a long-term commitment as far as I was concerned. Max said he would wait and would phone me in a few weeks to find out my answer. I did think about it a great deal. Then Max phoned me from Orkney on 19 October, which happened to be my fortieth birthday. I said that I would give it a go. After all, ‘life begins at forty’. Michael then spoke to Max and said that he would help me as far as business matters were concerned. I told Max that we should both give it try for a six-month period. If either of us felt unhappy, then we could withdraw, and there would be no hard feelings.

« Here’s how the Met gets its titles right on cue

The funkier side of Benjamin Britten »