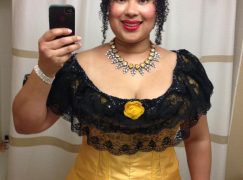 Our story of how violinist Jen Lindsay saved Aida last week by standing up in the orchestra to sing an aria when the soprano missed an entry went viral worldwide.

Then we discovered that Jen is an aspiring opera singer, applying for auditions around the US.

Now the story gets even more interesting. Jen is a mathematics and computer science grad who went to work in the defence industry until a voice in her head said: you can’t gve up the opera dream. 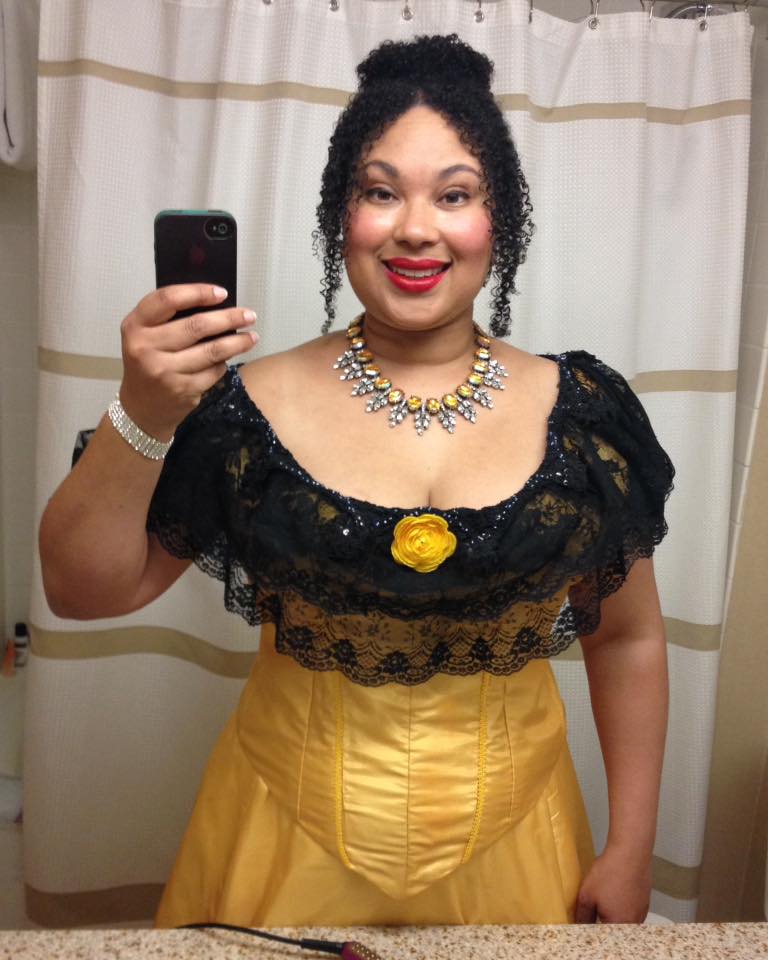 I grew up in a household steeped in classical music. Neither of my parents were musicians, but they listened avidly to the likes of Mozart, Beethoven, Handel and Tchaikovsky. One day they read a book that said playing an instrument accelerated neurological development in young children, and so at age 3 I began violin lessons in the Suzuki method. Several years later, I started singing along to opera recordings with uncanny accuracy, so they signed me up for a local children’s chorus whose director eventually suggested that I start taking private lessons.

Throughout high school I continued studying both violin and voice, joining several youth orchestras and doing local competitions where I had some success despite my aversion to practicing. When it came time to apply to college, my teachers encouraged me to consider a conservatory. However, I also excelled in math and science, and that seemed like a safer career bet. I put music on the back burner and went on to receive a BS in Math at Harvey Mudd College, a MS in Operations Research at Columbia University and a MS in Computer Science at Johns Hopkins University, after which I began a career as a programmer in the defense industry. However, after several years of this sort of work, the initial excitement of my career choice faded and I began to feel like something significant was missing from my life.

A few years ago, a friend invited me to see him in a performance of The Marriage of Figaro. I thought it was a joke, because the only opera company I knew of in Los Angeles was LA Opera, but he assured me it was the real deal, so I duly showed up. There, in a church sanctuary, he and several other singers did justice to Mozart despite budgetary restrictions, accompanied by a pianist and a string quartet. Afterwards I cornered him and asked how I could get involved and he told me about some upcoming auditions. I ended up being cast as a witch in Verdi’s Macbeth. It was my very first staged opera production, and I was hooked.

I found a voice teacher and began studying again, this time practicing regularly. After a year of auditioning on the local circuit I landed a Fiordiligi cover, impressing them so much they hired me back for subsequent productions. I had finally broken out, but the experience left me hungry for more. On my teacher’s suggestion I applied to young artist programs, but I received not a single audition. I realized then that my resume looked like a joke: no music degrees, no awards, only local credits. I had to find a way to be taken seriously, so I applied to several national competitions. I ended up reaching the semi-finals round in 3 of them and the finals round in a 4th. With these accolades I finally looked like a real contender, and in 2016 I was accepted to young artist programs at Opera Naples in FL and the Caramoor Bel Canto Festival in NY.

This year, I was admitted to a third program at Opera Southwest, forthcoming this October. I’ve also continued pursing local opportunities, most recently—-and semi-famously—-as the title role cover for Aida with the Marina Del Rey Symphony. Each time I’m in a production with orchestra I try to find a way to play at least one rehearsal to learn the score better, but this often doesn’t work out because there is limited pit space, or because orchestra rehearsals conflict with singer rehearsals. So far I’ve only played two operas, La Traviata and Aida, but I hope to play more in the future. It would be amazing to sit in with LA Opera Orchestra, but that’s probably a pipe dream.

I realize that my chances at an international opera career are slim to none, but if I don’t give it a shot I will come to regret it in my later years. I’m hopeful that I will eventually see some success at the regional level, and I would love to have the chance to travel the country covering roles and playing in the orchestra as a violinist – a sopranolinist, if you will. I’ve also developed a knack for resilience, due to the constant rejection of the audition circuit, and I’ve made some truly wonderful friends. However it all works out, I’m definitely creating a much more exciting and fulfilling life than before, and that alone is worth all the hard work.

« How Stephen Hough would save classical music

An eminent US violin teacher has died at 95 »