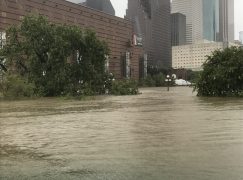 Houston Ballet is forced to cancel as waters rise

The performances of Poetry in Motion scheduled for September 8 to 17 have been called off due to flood damage in the Wortham Theater Center.

The company is hopeful that the premiere of Sir Kenneth MacMillan’s ballet Mayerling will go ahead on September 21, but there are many logistical problems to overcome before that can be confirmed.

The Center’s garages are still under water, so there is nowhere for patrons to park, and many artists and staff members have been left without basic amenities. After Tropical Storm Allison in 2001 it took three months to restore the garage area.

The Houston Symphony is now reporting extensive damage to its basement rehearsal room.

Abbado’s son is taken on by the BBC »