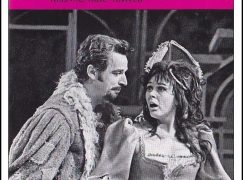 The Canadian tenor Emile Belcourt, who has died at 91, was a stalwart of English National Opera for more than 30 years, singing Loge in the indelible Reggie Goodall Ring, Herod in Salome, Danilo in the Merry Widow and countless other parts.

He married the Irish soprano Norma Burrowes in 1980.

I remember him best in 1986 in the world premiere of Michael Nyman’s brilliant chamber opera, The Man who Mistook his Wife for a Hat, based on Oliver Sacks’s case study.

Our sympathies to Norma and the children. 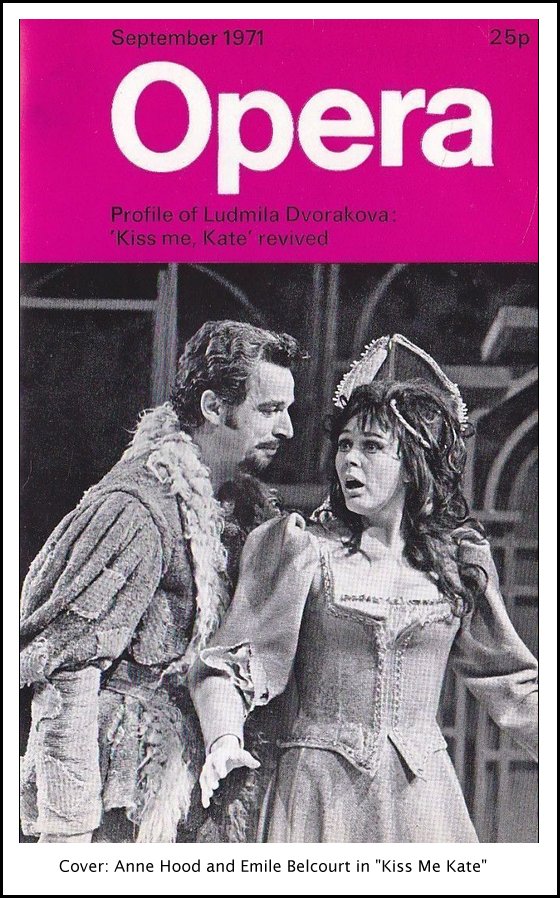 Emile was born in Laflèche, Saskatchewan on June 27, 1926, to Adrien and Jeanne Belcourt. Even in early life, Emile was full of the kind of energy that can’t be contained. He often told us that when he was a small child, his grandfather would sit him down at the table, place a stopwatch and a quarter in front of him, and say, “If you can sit still for five minutes, that money’s yours.” He never did get that quarter.

Emile’s mother Jeanne (née Rivard) was perhaps his first musical influence. She was a piano teacher, church organist, and she even played the piano during silent films at the local theatre. She fostered his musical talents from an early age, encouraging him to learn the violin and to sing in music festivals. After a stint in the Navy at the end of WWII, Emile went away to University to study pharmacy, but his mother made him promise to keep taking singing lessons. This paid off greatly; in 1949, the same year he earned his degree, he brought the house down singing Una Furtiva Lagrima at the Justice Brown competition, winning best amateur singer in Saskatchewan. A British adjudicator in attendance, Helen Henschel, convinced him to follow her back to London—advice that would soon propel him into an illustrious singing career that would take him all over the world.

Emile went to England and joined the chorus at the prestigious Glyndebourne Opera House. In 1951, he married Margaret Eagle of Prince Albert, Saskatchewan. Impressed by the Austrian singers at Glyndebourne, he went on to study at the Academy in Vienna, where he trained in lieder and was encouraged to develop his voice as a baritone. Emile and Margie started their family there; they would go on to have seven children over the course of ten years. In 1954, Emile joined the company at the opera house in Ulm, Germany, where he stayed for three years, and then in Bonn, Germany, where he stayed for one year. By the late 1950s, he was in Paris, and starting to return to tenor roles. He was cast in the title role in Pelléas et Mélisande, in a production that was broadcast on French public radio; this recording caught the attention of Scottish Opera, who immediately engaged him to perform the same role for them. From there, he made his English debut at Covent Garden as Gonzalve in L’Heure Espagnole in 1963, conducted by Sir Georg Solti, and later that year, he joined Sadler’s Wells Opera Company (now the English National Opera) with a debut performance as Pluto in Orpheus in the Underworld.

In 1965, Emile was cast as Jimmy Mahoney in a production of Weill/Brecht’s The Rise and Fall of the City of Mahagonny, directed by Philip Saville for BBC Television. For this occasion, Emile bought his very first television set so that he and his family could watch his starring performance.

The ENO became Emile’s home company for the next three decades, and he gave many memorable lead performances there, including Eisenstein in Die Fledermaus, Herod in Salome, Danilo in The Merry Widow, Shuisky in Boris Godunov, Raoul in La Vie parisienne, among many others. He received much critical acclaim for his performance as Loge in Sir Reginald Goodall’s famed production of The Rhinegold, which was recorded in 1975 for EMI. He reprised this role many times in productions in both London and Seattle. Emile believed strongly that opera should be performed in the language of the audience viewing it, and his English Loge was renowned not only for his singing, but also for his brilliant acting, clear enunciation, and remarkable commitment to the meaning of the text.

Emile often came back home to Canada to perform, singing for the COC, the Edmonton Opera, and the Guelph Spring Festival. He married Irish soprano Norma Burrowes in 1980, and they had two children, whom they raised in England and Canada. He also made a name for himself in musicals and musical theatre, appearing in lead roles in Sweeney Todd, Kiss me Kate, The Diary of Anne Frank, and Lend me a Tenor, among others. At very short notice, he took over the lead role of Don Quixote in Man of La Mancha for two weeks in the West End in London. Most notably, he played a starring role as Émile de Becque in a revival of South Pacific that packed the Prince of Wales theatre in London for over a year in 1988. The production also toured in Osaka and Tokyo, Japan.

In 1986, Emile sang the role of Dr. S in Michael Nyman’s opera adaptation of Oliver Sacks’ case study The Man who Mistook his Wife for a Hat. Emile often spoke of his admiration for Sacks, who appeared alongside him in the 1987 film version.

Emile continued to sing well into his seventies, performing for the soundtrack of Mike Newell’s 1999 film Pushing Tin. He gave a memorable concert on his 80th birthday in Toronto at the Heliconian Hall, where he showcased his early love of German lieder. In recent years, he kept his love of music alive by singing every day, supporting his wife Norma Burrowes in her teaching of young singers, and encouraging his son Sebastien who is now pursuing his own singing career. He spent his last years surrounded by music and family, enjoying the little things in life, and generally charming everyone he met.

Emile led a big, long life, with too many highlights and adventures to list here. He lived his life with great zeal, and loved and cared for his family and friends. He will be sorely missed.

A celebration of Emile’s life and career will be held at the Heliconian Hall in Toronto on September 24, 2017, at 3pm.

« The occult past life of my old violin

Andrea Bocelli to be conducted by robot »