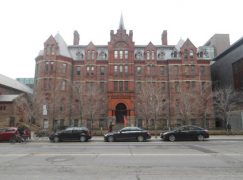 Death of an important piano teacher

The death has been announced of Boris Lysenko, head of piano at the Leningrad Conservatory until 1980, when he migrated to Canada and began teaching Royal Conservatory of Music in Toronto.

Lysenko died early this month of a heart attack. The news was released today through the university.

No photograph is presently available.

Dear Colleagues:
It is with great sadness that I inform you of the death of Faculty of Music piano colleague Boris Lysenko from a massive heart attack earlier this month. We received this information only very recently and are aware that the family kept matters quite private.

Boris Lysenko’s piano studies began in his early youth at the Leningrad/St. Petersburg Conservatory and Berlin Hochschule für Musik, where he studied with Richard Rössler. He obtained his doctorate in piano from the Leningrad Conservatory, where he studied with Natan Perelman. Lysenkotaught at the Conservatory for twenty years, becoming head of its piano department and vice-president. He emigrated to Canada in 1980 and soon began teaching for the University of Toronto Faculty of Music and the Royal Conservatory of Music (including the Glenn Gould School). Speaking personally, I remember him well from my earlier days in Toronto at the RCM and feel fortunate to have connected with him again on my return to UofT.Boris had a long and accomplished career as a performer, adjudicator, and teacher and will be deeply missed for his artistry and mentorship. Our sympathies and condolences to his family, many students, and respected colleagues.

« Abbado’s son is taken on by the BBC

Dmitri Kogan is remembered for his charity »