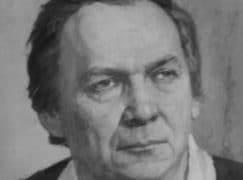 Death of a favourite Shostakovich student

A survivor of the siege of Leningrad, Boris Grabovsky returned from the War to find his father declared by Stalin an enemy of the people and his own chances of getting into conservatory close to zero.

Somehow, Dmitri Shostakovich smuggled him into his class.

The pair remained confidants ever after.

Grabovsky, who died on August 16 at the age of 85, was closely involved with the Leningrad poets, composing more than 100 vocal scores.

How Stephen Hough would save classical music »