The jazz and cabaret singer Janet Seidel died on Tuesday. She received the diagnosis nine months ago, on returning from tour. She continued touring until her last weeks.

Janet was hugely popular in Japan. In London, she sold out Ronnie Scott’s three nights running.

The Penguin Guide to Jazz on CD (2006) called her ‘Australia’s first lady of jazz singing’. She released 18 records. 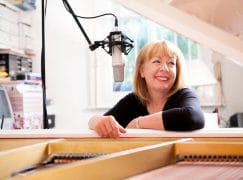