A wedding in the Skriabin family

Elisha Abas, the Israeli pianist and former footballer, got married this weekend in New York to  Anna Neelam Rickman.

Elisha is a great-grandson of Alexander Skriabin’s daughter, Ariadna, who died fighting the Nazis in France. 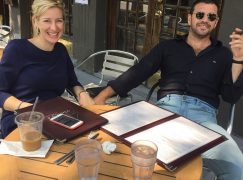