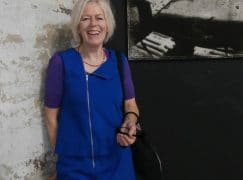 A musical explorer is felled by a stroke

I am bereft by reports of the death of Sue Steward, a formidable writer on world music and a fantastic photographer.

Sue was among the first people I hired at the former Evening Standard and her reports and reviews always brought a smile to the page. She was warm, witty, charmingly naive and incredibly humane.

As a young woman she hung out with the punk revolution and wrote perceptively about its aims. Later, she travelled the world, delving into indigenous musics. She was an infallible authority on Cuba. She also had an acute eye for a picture.

Sue suffered a stroke earlier this week. Her death has been reported on her Facebook page. Sue was 70.

She was one of a kind.

Russian opera director is under house arrest. Germans scramble to save production »