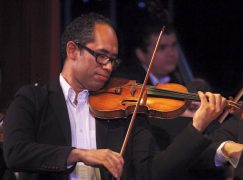 A London concert to rescue a Venezuelan family

London musicians are putting on an Emergency Fundraising Concert for Juan Manuel Gonzalez Hernandez, a player in the BBC Concert Orchestra who is trying to get his family out of Venezuela to a place of safety in Mexico.

Juan writes: I am a violinist from Venezuela living in London. My country is seeing one of the darkest, saddest and most violent times it has ever experienced. The crisis there has reached levels that for us living in Europe are difficult to imagine. There is no food, and when there is, people have to queue for many hours. Inflation is currently at 720%. People are destitute. There are no medicines, the health system has collapsed, people are dying because of shortages of medicines or hunger. I am trying to raise money to help my family leave Venezuela as soon as possible and move to Mexico where friends will help them to settle.

During my time in Caracas, I joined my sister Daniela and my 18 year old nephew Daniel at a peaceful protest that turned into a bloody nightmare, a nightmare that Venezuelans endure every day. The police shot stone bullets into the crowd, my nephew was shot in the neck.

It was very frightening. He was taken to a hospital and he survived, only to then have to escape the hospital to evade the police waiting at bedsides to arrest and then torture protesters.

« Cellist is beaten by Turkish police as terror suspect